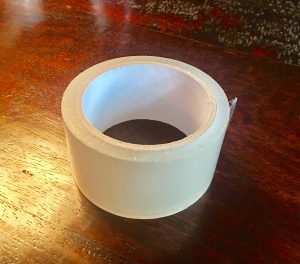 It was the day before my aunt’s 98th birthday party in North Florida. I was determined to be there, even though I was in DC and would have to make a long drive. I’d been in DC working on a client project and staying at a friend’s place while she was out of town.

As I gathered my belongings, a voice in my head said, “Take the tape.” I glanced at a large roll of cellophane packing tape on a nearby table. I didn’t really need packing tape for anything  and it wasn’t mine. “Take the tape,” the voice repeated.

I felt a momentary pang of guilt. “Am I stealing my friend’s tape?” I wondered.

My answer was clear: “Take the tape.” It was soft, but straightforward, direct and matter-of-fact.

By now, I’ve learned to listen to that voice. It’s my intuition, a knowing-without-knowing-how-you-know sense that gives me direction in just that direct, matter-of-fact way. There’s no urgency, no alarm, no anxiety attached to it. It doesn’t ever explain itself or argue with me. If I ignore it, it doesn’t care. And its directives are simple: “Take the tape.”

So I grabbed the tape and stashed it in the trunk of my car.

I left late that Saturday afternoon. I figured an evening drive would be easy—it would be cooler and there would be less traffic. I planned to stop in about six hours, the halfway point.

The trip went uneventfully for several hours. I sped along listening to music, talking with friends, and enjoying occasional periods of silence. Somewhere in southern Virginia it began to rain lightly. Virginia gave way to North Carolina and the rain picked up.

Between the dark and the rain, visibility had diminished. I was glad there was barely any traffic on the road.

And then I saw it, although I’m still not sure exactly what it was. It was an animal, the size of a very large dog, headed across the road, right into the path of my car. There was no time to avoid it. As soon as I saw it, I hit it.

I was afraid to stop—I was a woman alone on a deserted highway at night. I couldn’t turn around—this was the interstate. I had no doubt that the animal hadn’t survived, so there was nothing I could do to help it.

I slowed the car and leaned forward to check the dashboard and the hood of the car. There was nothing unusual—no warning lights, no steam coming from the engine. The car’s steering seemed fine, so I sped back up, eager to find a room for the night.

That’s when the noises started. Loud, sharp banging noises. Something was hitting the side of the car, very close to where I was sitting. BANG! BANG! BANG! Loud, sharp sounds, almost like gunshots.

The noise was frightening and my imagination went wild. I visualized something bloody and horrible, entangled in the bumper and crashing into the side of the car. I began to shake and cry as I slowed the car to 20 miles an hour. At the slower speed, the noise stopped. If I sped up, the banging started again and the images came back.

That voice spoke again. “Calm yourself.” I reminded myself not to let my runaway thoughts take over. I practiced mindfulness techniques, shifting my attention to the road in front of me, to the steering wheel in my hands, to my breath.

When I got to the nearest exit and parked at a gas station, there were no other cars around. I realized I was going to have to deal with whatever was making that noise. There was no one to help me. The horrible image came back and I began to tremble and cry.

Again, the voice guided me. “Breathe,” it said and I began to take slow deliberate breaths. Inhale-2-3-4-exhale-2-3-4, over and over, the way I’ve done alone and with clients hundreds of times.

When I felt my body settle down, I opened the car door and gingerly peered over the top of the door. I was relieved to see a long black strip of something on the ground. The fender molding had torn loose and had been whipping into the side of the car. There was a row of dents and scratches on the car door. That’s what I’d heard. There was a lot of other damage to the front of the car–grills and lights were dangling. But the molding was the most immediate problem.

I yanked but couldn’t get it off the car. One end was too firmly attached. I saw that it had tabs that fit into slots on the fender. I snapped it back into place, but it fell right off. The tabs were too badly damaged.

That’s when I remembered the tape. The tape! I grabbed it from the trunk, taped the molding and the other dangling pieces in place and went for a test drive. It worked! I got back on the interstate and increased my speed to 60, and then 65 miles an hour.

No banging! It was such beautiful silence. I drove an hour to the next town, and found a room for the night.

And that’s the way that intuition works. It’s firm, but not pushy. It’s direct, but never shrill. It doesn’t explain, doesn’t give reasons, and it may seem puzzling. It won’t argue with you–it’s apathetic if you ignore it.

Intuition won’t give you suggestions that are inconsistent with your values, either. My intuition didn’t suggest that I take my friend’s jewelry—it suggested a roll of tape, something I’d tell her about and she could easily replace.

Intuition is very different from fear. Fear screams until it rattles your bones. It cares passionately and it doesn’t let up until it thinks you’re safe. My fear had created the violent images in my head. It was certain that something horrible had happened and was desperately trying to get my attention.

Intuition just makes a suggestion and lets it go.

I’ve spent most of my life ignoring that small voice. Sometimes the messages were big and important: “Don’t say anything,” or “Time to leave.” Some messages were tiny and insignificant, “Buy the red shoes,” “Bring an umbrella,” or “Don’t let this guy cut your hair.” Failing to listen to and trust those messages often cost me dearly—huge arguments, lost opportunities, botched haircuts.

Finally, I’ve learned to listen to that voice. By paying attention to it back in DC, when it made no sense to do so, I arrived at my aunt’s birthday party right on time.

If I had doubted it, if I’d left the tape behind, it would have taken me several hours to get to that town with a room. Then I’d have had to find a way to repair my car on a Sunday morning in a remote area of North Carolina.

Instead, my intuition, that crazy knowing-without-knowing-how-you-know, unexplainable power had saved the day. The tape held beautifully for the remainder of my trip. My aunt was thrilled to see me, and I was thrilled to be there.

After all, how many times do you get to go to a 98th birthday party?